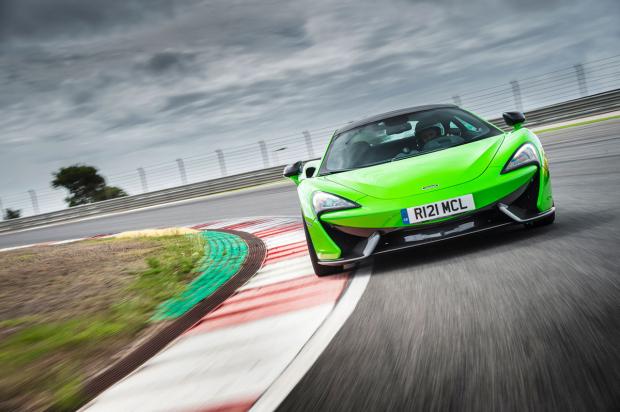 THE stunning 570s is the first in McLaren’s long-awaited line of Sports Series models that share much of the existing Super Series cars’ core technology, but at a lower price point. For a mere £143,000 or so, plus options, you get an evolution of McLaren’s amazing carbon ‘tub’ chassis, with 85mm lower sills for easier access, and a slightly detuned version of the mighty 3.8-litre twin-turbo V8.

The exhaust is all-new, though, to give the 570S a racier and higher-pitched howl than its 650S big brother. There’s a new colour – Vermillion Red – and super-light alloy wheels at each corner, at reduced widths to ensure the right balance of power and grip.

The more you look at it the better the 570S gets. Essentially it’s the same shape as the old MP4-12C, but at the same time it’s oh-so shapely. The way the bodywork curves gracefully around the wheels, punctuated by vents and aerodynamic structures like the ‘detached’ rear pillars, is 100 per cent supercar. As cars in this class go, they don’t get any better-looking or any more exotic.

McLaren Automotive is still a very young company and can’t match the heritage of Porsche, one of its main rivals, but the 570S has a beguiling DNA that the 911 Turbo just can’t match.

The Woking-based firm has done what it can in terms of making space available for luggage. If your bags are the right size and shape, the under-bonnet storage bay can hold enough for a weekend away for two, and there’s a shelf behind the two seats where coats or bags can be stashed at need. Just don’t stamp on the standard carbon-ceramic brakes if there’s anything loose up there.

Handy new door pockets fold out close to the arm rests and can hold small bottles of water. The glove box is adequate, too, which is really all you can ask of a car like this.

On paper the 570S has less pulling power than the evergreen 911 Turbo, but near-instant throttle response is chased by crushing torque that makes an indelible mark in your memory. This thing is fast with a capital F. Once you get over the sheer force of it, you can tell it’s less vicious and less likely to bite than the lighter 650S, and the traction control systems here are tuned primarily to prevent any accidental car/tree interfaces.

Send the electronic nannies to the pictures and the 570 is phenomenal, with a staggering level of balance and communication. Oversteer is controllable, chassis reactions are predictable and the turn-in is tack-sharp thanks to a faster steering rack than even the 650.

Crucially, the junior S isn’t too wide to take on country roads. Its 204mph capability is married to finely-tuned manners that put it among the easiest supercars to drive fast on the kind of roads that demand it. Visibility down towards the front of the car is impeccable – better than most hatchbacks – and placing the inside wheel right on the apex is a thrill you’ll never tire of.

Value depends on your perspective. On the one hand the McLaren is more exotic and racier than the immediate competition, but it does come with fewer technological gadgets than rivals. There are no buttons on the steering wheel for a reason – this is a car to be driven (and looked at) rather than played with. And on the road that is a Good Thing.

The 570S is a slice of genuine supercar at a price point that has been just a bit beige when compared to the £200,000 end of things. It’s an exciting car, it’s comparatively exclusive and it’s British. The Brit tag, especially in automotive engineering circles, carries as much weight as it ever has. With leasing deals dropping well below £1,000 per month after a hefty deposit, this is as tempting as Taylor Swift covered in chocolate cake.