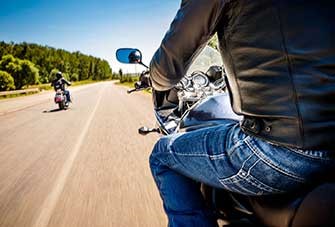 Motorcyclists face considerable risks every time they hit the road. In fact, motorcyclists are 29 times more likely than passengers of other vehicles to die when involved in a crash.

According to the Insurance Institute for Highway Safety, 4,976 motorcyclists were killed in accidents in 2016. That’s more than double the amount of motorcyclist deaths in 1997. For every fatal motorcycle crash, there are many more non-fatal crashes that result in serious injury.

A motorcyclist might suffer several types of injuries in a collision with another vehicle. One of the most common types of injuries in motorcycle crashes is a traumatic brain injury (TBI). TBI’s can range from mild concussions to severe brain damage and cover all points in between. A serious brain injury can impair a person’s memory and ability to process language, and it can take a significant toll on a person’s mental wellbeing.

Collisions with vehicles might also result in serious fractures, including broken hips, ankles, wrists or vertebrae. Spinal damage is one of the most serious injuries suffered in these crashes. Spinal cord injuries are often debilitating, painful and expensive for the injured person.

Severe road rash, also called road burn, is another common injury for motorcycle accident victims. Road rash occurs if the victim is knocked off the motorcycle or dragged along the pavement. Skin layers can be torn off, resulting in excruciating pain and a long, expensive recovery.

The impact of a collision with a vehicle might also result in internal injuries. Organ damage can be difficult to detect by medical professionals, making this type of injury particularly dangerous for sufferers.

Why Are Motorcycle Accidents So Deadly?

Motorcyclists are in a uniquely vulnerable position compared to automobile drivers. Motorcycles are far smaller and lighter than other vehicles, so they’re more likely to lose control in situations that might not affect drivers of standard cars, SUVs, or trucks. Motorcyclists are more exposed and, thus, more vulnerable than occupants of passenger vehicles to serious injuries.

Sometimes, the motorcycle’s design is not to blame, but rather, the negligence of other drivers. Many drivers fail to consider that they need to behave differently around motorcyclists. Drivers should always use turn signals and leave greater distances between their vehicle and the motorcycle.

When a driver fails to drive safely around a motorcyclist, they can be held accountable for their role in an ensuing crash. You can find more here.

If you or a loved one was injured in an accident and you believe that vehicular negligence was to blame, you may be able to receive compensation for the damages you’ve experienced.

The victim holds the burden of proof in a personal injury case, so evidence is needed to demonstrate negligence. The laws governing the importance of negligence in an injury claim vary by state. South Carolina is a modified comparative negligence state, so motorcyclists deemed partially at fault can still hold the other party liable. For example, proof of the motorcyclist speeding wouldn’t automatically destroy an otherwise promising case; the speeding motorcyclist simply must be determined less at fault than the other driver.

Every trip on a motorcycle can be a risk, but it shouldn’t be nearly as dangerous as it is. Negligent drivers need to be held accountable for their failure to treat motorcyclists with the attention and respect they deserve.