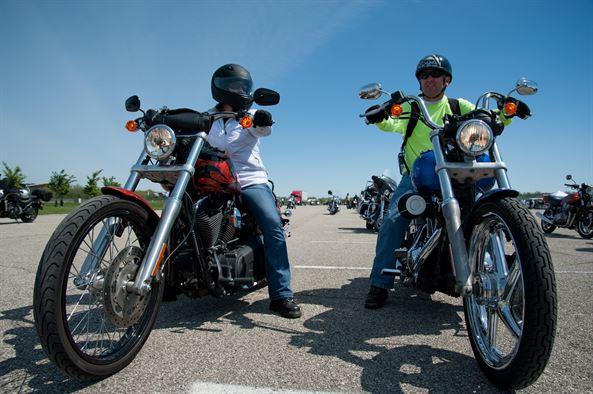 Motorcycles have a bad reputation in some circles. That might be because motorcycle riders are sometimes regarded as the outlaws of the streets, though that is a reputation that is seldom deserved. Yes, there are irresponsible motorcycle riders on the road, but it is just as likely that you could encounter a careless car or truck driver. You could even make the argument that motorcycle riders are more inclined to follow the rules of the road than car or truck drivers. On a motorcycle, they are more exposed, so they’re usually going to follow traffic rules even more carefully than other vehicle operators. There are actually certain ways that motorcycles are safer than cars. Let’s look at three of them.

You Can See More

A motorcycle is safer than a car because its rider can see more of the road ahead of them. That broader perception means that a motorcycle rider can spot danger or possible road obstructions faster than a car driver might. If a motorcycle rider turns their head, they have an unobstructed view of everything around them. There are no blind spots. That’s hardly going to be the case if you’re in a truck, car, or SUV. If you can see more, then you can avoid more. Operating with the knowledge that better vision of your surroundings is safer, this is a way that you’re better off on a motorcycle from a safety perspective.

A motorcycle is smaller than a car, so the rider of one can use evasive maneuvers that a vehicle could not if they were faced with a sudden accident ahead of them or some other obstruction of the road. Assuming the rider has some good reaction time, they can slip between vehicles in a way that would never be possible for a car or truck. On a motorcycle, you also make less of a target. Where in some cases a car pulling up behind you might surely run into you in a larger vehicle, you may be able to avoid a collision on a motorcycle. Pileups happen when cars are involved, but hardly ever motorcycles. Pulling onto the shoulder is much easier with a smaller vehicle.

If you’re on a motorcycle, you are more attentive to the road around you and what’s on it. You’re not likely to be talking on a cell phone, texting, or trying to eat the burger you just got at the drive-through if you’re on a motorcycle. Those things are almost an impossibility. Distracted driving is much easier in a car because you feel safe enclosed in the framework. On a motorcycle, you have no choice but to be more engaged with the road around you and whatever is on it: kids on bikes or skateboards, animals, other vehicles. With motorcycles, distractions are diminished.

If you look at it this way, you can see that motorcycles are nowhere near as dangerous as some people believe. If you’re convinced, you can look at sites like www.cleanharleys.com today to see some of the buying options that exist. The fun of a motorcycle ride is something everyone should experience at some point, and you should not let the stigma attached to these vehicles keep you from purchasing one.